How to add value to a traditional West End home

Ross and his wife Sarah decided to move back to Scotland after living in the USA for a few years, to find a house that they could turn into their dream home.

Charmed by its location and potential, they chose the very last house from their 15 viewings they had lined up in the 2 weeks over Christmas in 2015, and made the move at the end of the following January.

Although the house was in their ideal location, there was a lot of work to be done both inside and outside to create the home they had dreamed of. So Ross and Sarah approached the Tinto team to see what we could do for them, and we quickly got to work in bringing their visions to life.

We caught up with Ross to talk about the process and find out how him and Sarah are enjoying their home now.

What was the house like before the project started?

“The house was in serious need of an update. I had been more focused on looking at floor plans and initially, when my wife first saw the interiors of the house, she just said “no way”. There were very old school swirly carpets, and olive green bathroom suites - it was very dated.

“The outside of the house was tired too and there was lots of work to be done. But the garden was beautiful, with a river at the end of it, and we fell in love with location, so we took a chance on the house and put the wheels in motion straight away. As soon as our offer was accepted we started engaging with Richard and visited the Tinto office to see what the team could do.”

When the work got underway, what was the first step in the process?

“Updating the interiors was our first focus of the project, making the inside of the house how we wanted it. We managed to renovate the whole place in 6 months.

“We had the whole interior ripped out - carpets, kitchen, bathrooms, cupboards, everything. The only room that was left untouched was the downstairs bathroom as it was fairly modern.

“The layout of the rooms was completely changed as well. We took out the walls on either side of the fireplace to create a two-way fireplace which led through to the dining room. And in the dining room we took the wall between there and the kitchen out to create one big space with half height walls with glass, so you can see all the way through. This really helped to create the more open living space that we had wanted.

“The amazing part was sending a bunch of photos to Richard of our furniture, which he could put into a model to visualise the layout. Our living room looks exactly like the visuals they gave us, and the kitchen we bought was also put into these designs, so we knew exactly how it would look in the end.” 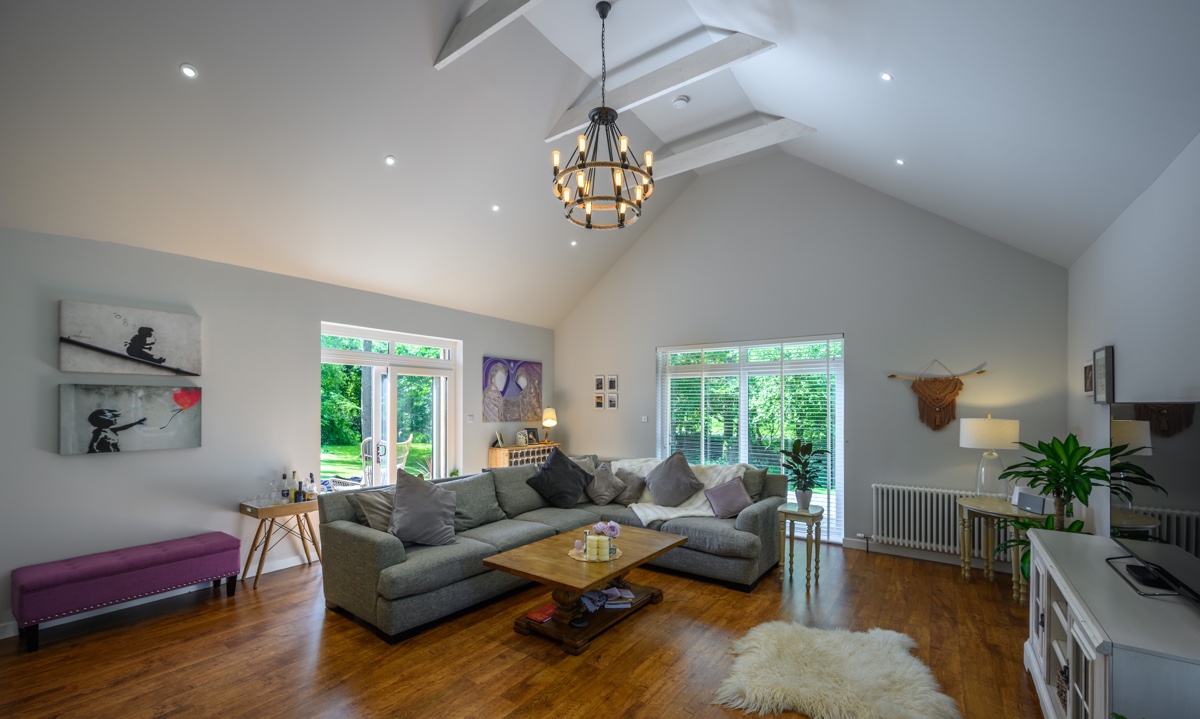 Were there any part of the designs that you hadn’t thought of before?

“We knew we wanted to open up the downstairs area, but we had never thought about taking the ceiling out of the living room, which is what Richard advised to create full height in the space.

“We absolutely love the end result, the room is much more open but there isn’t too much empty space, and it still feels homely.”

What led you to getting the work done on the outside of the house?

“After we had lived in the house for a year or so, there were things that bugged us about the outside of it. The exterior was made of old gray harling, the facias were mismatched, and the roof was 30 years old and covered in moss. We hated driving home from work and seeing how depressing it looked because we knew such amazing work had been done inside.

“We also didn’t like not having direct access to the outside from our open-plan area, and we had a second front door that was never used.

“We pulled ideas together in Pinterest for Richard and the team to look at, and then they came up with planning permission to get started on our plans for the outside of the house.”

How did the Tinto team transform the outside of the house?

“They completely re-rendered the house, cladded the gable end and put a new roof on that looked so much better than the old, dated exterior.

“We wanted some outside space, but having such a big garden was too unmanageable. So we got the world’s biggest decking laid around the entire house, with multiple levels. Before, it was just patio and concrete at weird levels and it was a nightmare to lift it so we put decking on top.

“From the inside, they bricked up the extra front door that we didn’t use and made it into a big cupboard. They took out the dining room window and installed bifolds, and just off the living room they put in another set of doors to help connect the inside of the house to the outside much better. It’s now a really nice area out there and we get the sun until 2pm.

“Something that we really wanted was an outdoor kitchen. From living in Houston, we loved BBQing outside, and now that we had a great outdoor space, we wanted to make the most of it. But, in Aberdeen you don’t always get the weather for it so you need cover.

“We had been looking at canvas canopies, but the team at Tinto came up with a great idea, where the roof sticks out of the side of the house to create a V-shaped canopy that gives you plenty of cover if it rains.” 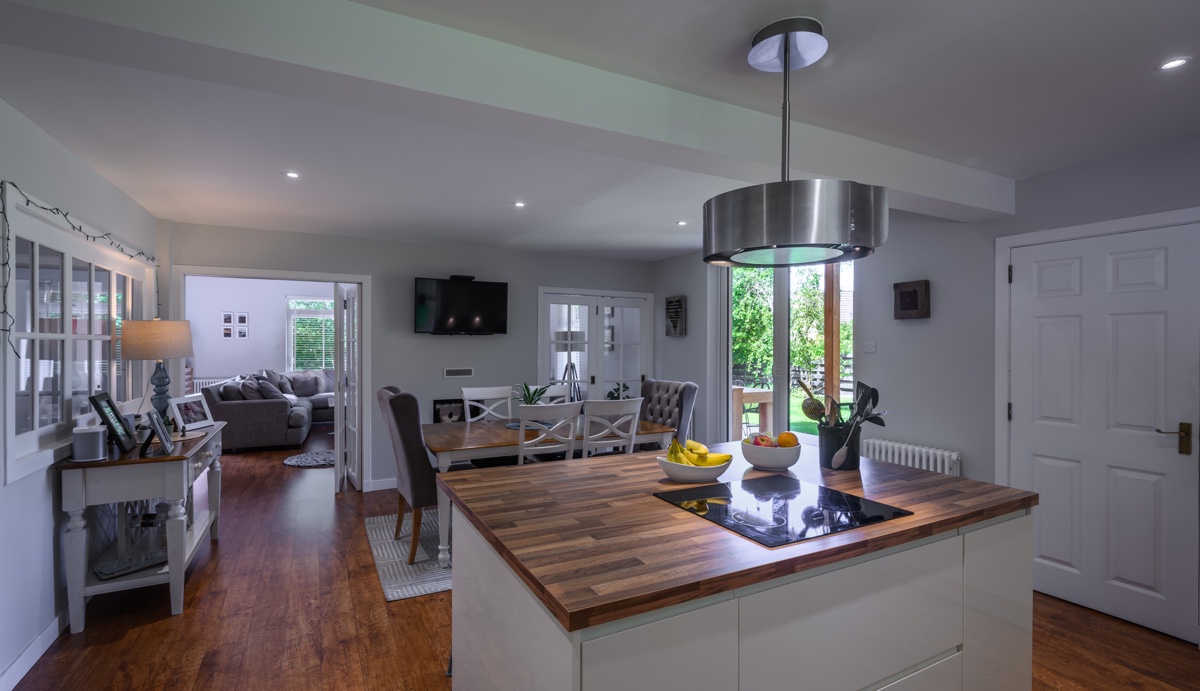 How has the project benefited you?

“The biggest thing for us was managing to take this house and add significant value to it, as well as creating something that’s ours. We wanted somewhere that was livable, and a place with potential to be a real, individual home. Richard and the team really helped us do that - we see this as our home for the foreseeable future and somewhere we can have a family.

“We now have a beautiful house to live in, in a beautiful location. We had ideas when we first bought it, but they just wouldn’t have worked. The Tinto team took all of those ideas and tied them together in ways that we couldn’t have, to create a beautiful home for us.”

What is your favourite element of your new home?

“I love our bathroom upstairs. I was adamant I wanted the biggest shower head, but that meant we had to find the biggest shower tray which was really difficult. So Richard and the team came up with a basis of the design and we took it from there to make it happen.

“I also absolutely love the pitched roof outside that Richard came up with - that’s one of our favourite things about the house. It’s great just having the huge outdoor living space - there’s two or three areas where you can sit and overlook the river.

“Being able to use the outdoor space now and to access it from all the important areas like the living room, kitchen and dining room is a huge benefit for us. And with all the glass, you can see the trees and the sun coming in - it doesn’t feel like there’s a barrier between the inside and outside anymore.”

What are your tips for others embarking on a renovation project?

“There are definitely some ‘oh sh*t’ moments, but once you start there’s no turning back. We used all our holidays to help do some of the work to keep costs down. It is super daunting but having a clear vision of what it’s going to be like at the end is always a good reminder of why you’re doing it. That’s what Richard and the team provided - clarity, which made the whole process a bit easier.

“A lesson we learned was to pay your architect to actually manage parts of the project. It can be very stressful managing it yourself and it really helped us having the Tinto team because they know the teams, contractors, and how to engage with them, as well as organising trades.

“We also got addicted to watching Grand Designs - it helps you get lots of tips on what to do and what to expect.

“I would also say to anyone, try and keep a smile on your face because it’s all worth it. It can be difficult to finish a busy day at work, then go to the house for hours and sort all the things you have in storage getting delivered, for example. But when you finish up the project, you can enjoy it and be proud of your work, and what you managed to do.” 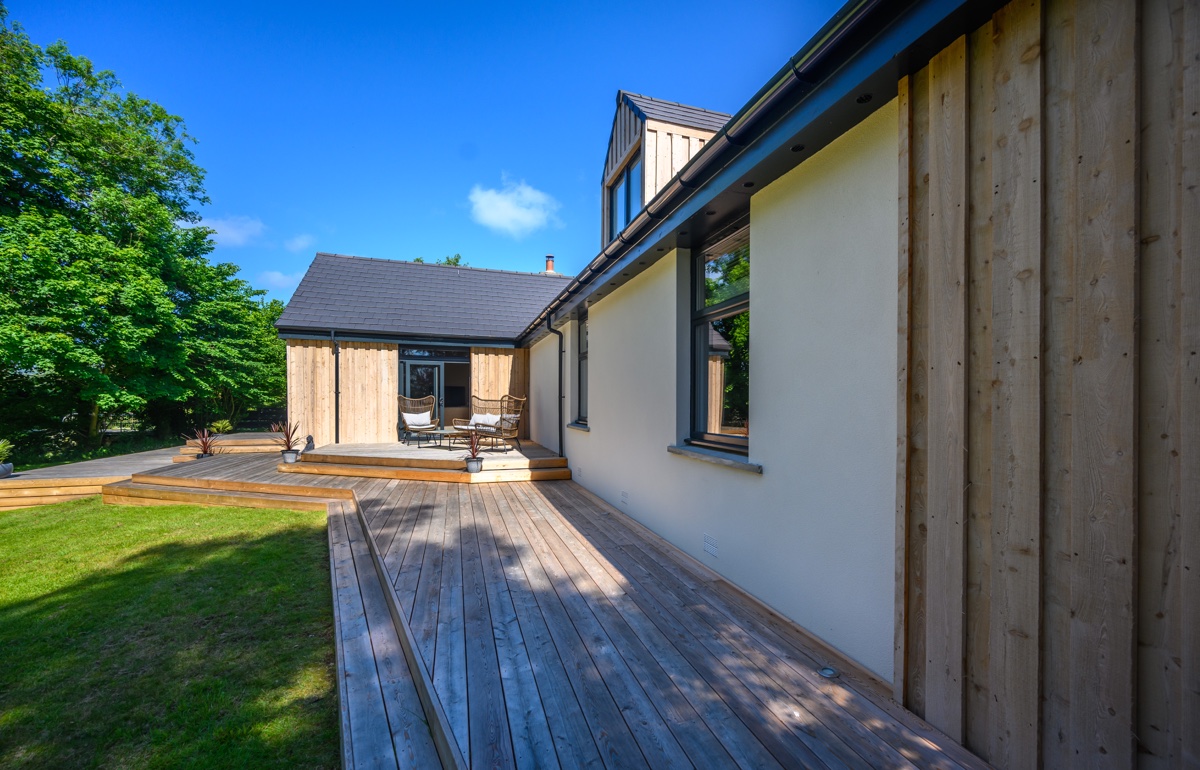 What have been your favourite memories since finishing this part of project?

“We had our first BBQ and even though was raining, it was amazing. We opened up the doors to the outside - everyone was using the different spaces, even the proper social area downstairs, which we hadn’t made use of yet. Our family and friends absolutely loved it, they couldn’t believe it was the same house we bought 3 years ago and it made us feel even more proud of it.

“For the first Christmas since the house was finished, we had both sides of our families over, and a big new year party with our friends. It was a really amazing time, and a great memory for us.

“We hadn’t had a house name up for 3 years since we started the work, but we had ordered a new sign when we had just finished everything and I had been waiting to put it up. So a few weeks ago we decided to have a naming ceremony. Sarah and our 3 month old daughter came out and got their photo taken outside the house, and we went round and put it on garage wall together. It’s super cheesy but it felt like a really monumental moment and made me feel really proud.” 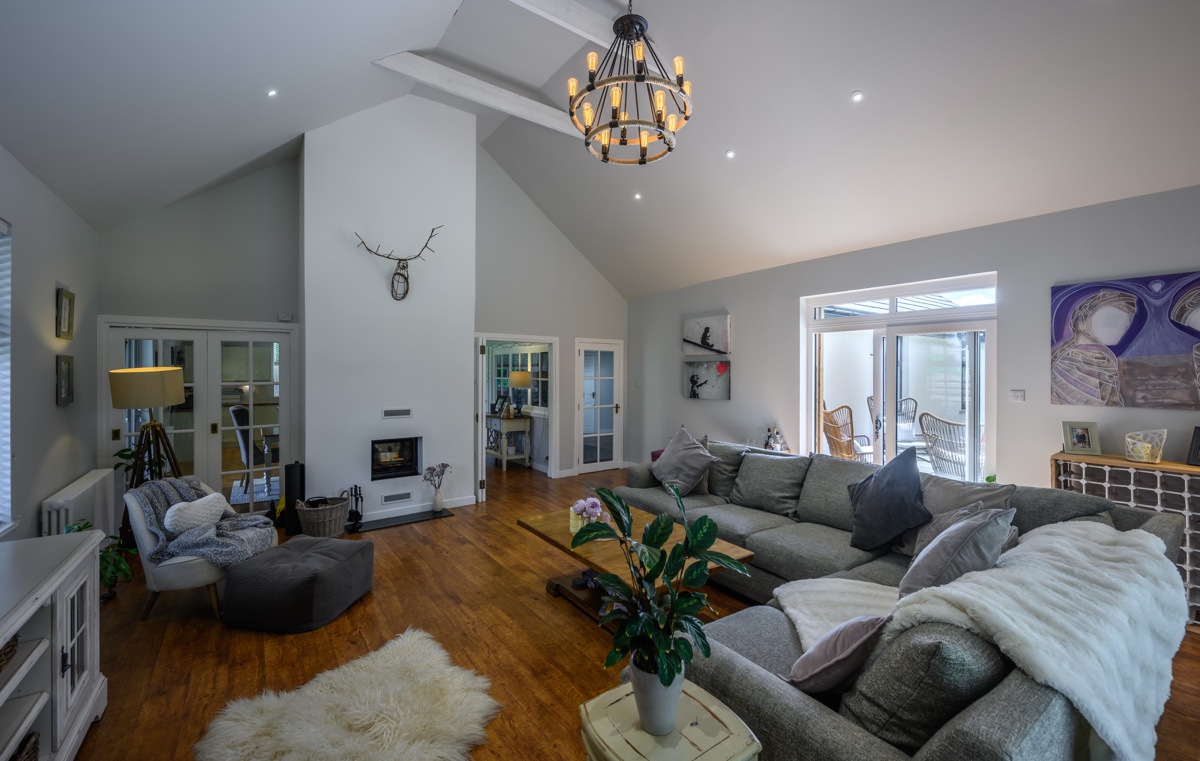 What impressed you most about working with the Tinto team?

“Richard really made a different when we ran into problems in the second stage of the project. Every time we went in for meetings in the office, Richard was always there driving and delegating the work which made a world of difference - it gave us the direction that was needed.

“The Tinto team also came up with some blinding ideas that we wouldn’t have considered, such as the glass door instead of a panel in our small hallway, that totally changed what we saw when we walk through the door and made the space feel more open.

“We’ve recommended Tinto to a few people, purely because what they come up with are things that you don’t normally see from run of the mill, old school architects. We wanted something different, modern, cutting edge, which is why we chose to work with Tinto.

“We can’t speak highly enough of Tinto team. You know the level of work and craftsmanship you’re going to get when you walk into office, and the interiors of the office backs that up. What they do feels young and vibrant, instead of old and dated, and that’s exactly what we wanted.”

If you’d like to commission or collaborate with Tinto Architecture

5 things to consider before you decide to move home

Interior design tips: choosing a colour palette for your home